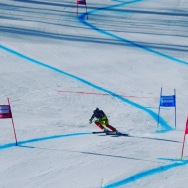 Day 3 dawned with clear skies again and hard early morning snow, but the impact of the sun on the “Russian Trampolone” section meant early start numbers ruled the day.

In last nights’ team captains meeting, Mens coach Johnny Kucera saw #1 was available, so grabbed it. Jack Crawford made good use of tactics as he then blistered the track to grab World Championship silver.

Kelby Halbert (2010) and Phil Brown (2011) won bronze in the combined (which was the combined results of DH, GS and SL – this event is now run as a separate race with SG and SL). Canada also won a bronze in the Nations Team Event in 2012.

2 1/2 hours later, Val Grenier made it a complete set of Junior World Championship medals, with her own aggressive attack that landed a mere .07 behind Nina Ortlieb, daughter of 1998 Olympic Downhill Champion Patrick Ortlieb.

Tomorrow is the busiest day of the Championship with both Alpine Combined events, or four race runs. Clear skies are forecast to hold, but temperatures are headed to spring-like levels