Och laddie … you always reminded us to make it fun. A tribute to our friend, Fitzi.

Imagine learning to ski on a plastic slope.

For thousands of youngsters in Edinburgh, Scotland the Hillend ‘dryslope’ ski centre was the introduction to our sport. A 400 metre long piste covered with plastic matting serviced by a chairlift.

Now imagine graduating from a ‘dryslope’ to become one of Great Britain’s best ski racers, an Olympian and taking on the best in World Cup competition.

Early Tuesday morning, I heard the sad news that our friend, Stuart “Fitzi” Fitzsimmons, our most unlikely of ski racers had sadly passed away due to complications with pneumonia.

Fitzi was THE free spirit of the World Cup Tour. Growing up in a city that is rarely frequented with snow, but had this unusual ski slope with a chairlift that made skiing accessible. He showed great talent and though the generosity of local benefactors was supported to get to programs and races on the real stuff at the Cairngorm Ski Centre, some 200 km. north near Aviemore.

I first met Fitzi at the 1973 British Ski Championships, where he used his deft touch on the skis emerge as one of Britain’s top talents in giant slalom. Learning to ski on a dryslope, he developed a unique skill to squeeze speed out of every turn. Once reaching the international level, his swift rise earned him a spot within the British Ski Team, joining Konrad Bartelski, Peter Fuchs, Willy Bailey and Alan Stuart. It was 1973.

That summer, under the watchful eye of Team GB’s coach, Dieter Bartsch, this young, brash group of teenagers welcomed a wayward young Canadian to join them for for three months of intense dryland conditioning at Struan House (Peter’s home) in Carrbridge, Scotland and skiing on the Dachstein Glacier above Schladming, Austria.

We parted ways the end of that summer, but within a year we were reunited in World Cup and EuropaCup races, as a determined crew working our way from the back of the pack. The adventure continued to the 1976 Olympic Winter Games of Innsbruck and the 1978 World Ski Championships of Garmisch.

Fitzi loved ski racing. He brought a special brand of zaniness to his own career. His unconventional origins – from a dryslope (plastic slope) – seem totally normal today with many top competitors emerging into the elite ranks from origins outside the traditional ski resorts. Leading this trend is Team GB’s David Ryding, who also started on a plastic ski slope, now one of the top slalom competitors in the world. Indoor ski halls dot the non-alpine landscape beyond the 40 dryslope and indoor halls in the UK – from Belgium, the Netherlands, France, Luxembourg, Australia, Japan and Dubai.

Fitzi was the first to begin from a dryslope, to achieve an international level of high performance on ‘real’ snow. A pioneer.

It was Fitzi Films where his ski skills and zaniness blended to make an indelible mark on the World Cup and endear him to several generations of ski racers whom he followed and featured. He became a ‘videographer‘ before anyone really knew what they were.

“Fitzi was a pioneer in this field too” recalled his teammate Konrad Bartelski in a Facebook post. “Way before the lightweight Go Pro style cameras were invented, Fitzi used to ski down the icy, fast and rough downhill courses with a huge, heavy camera in his hand and an even bigger Digi Beta recorder on his back. Always superbly close to the action, the dramatic and innovative images that Fitzi captured, helped put Ski Sunday on the map.” 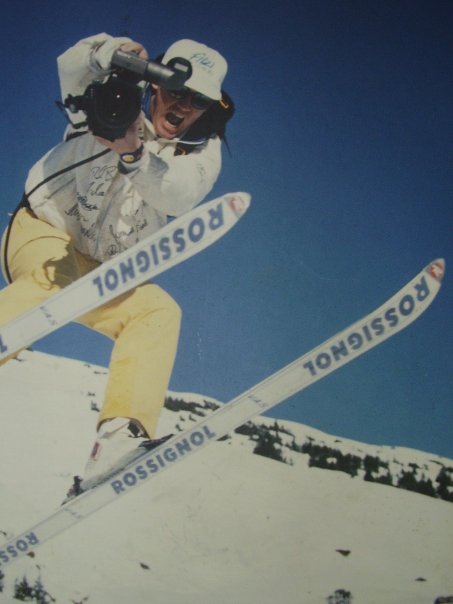 Ski Sunday, was the iconic BBC TV program which followed the World Cup through weekly broadcasts from the classic European ski resorts. Fitzi helped bring the action and the personalities of ski racing into homes across the UK.

Remember, this was well before miniaturized cameras. To shoot video meant toting heavy cameras and recording machines, so most camera work was shot while stationary. Not Fitzi, who threw the gear onto his back and with the camera on his shoulder would fire off down a downhill track at full speed.

Want a taste of his talent, go to Youtube through this link: https://www.youtube.com/watch?v=yx9_KUAZOqk

No one was more excited than Fitzi, when Konrad Bartelski scored his podium breakthrough in Val Gardena, Italy, with a 2nd place finish in the World Cup downhill in December 1982. This was the result British skiing and this young band of pioneers had worked so long and hard for — they believed. Over a decade from when this unlikely crews were pulled together, only Konrad was left to carry the Union Jack. And Fitzi, working in World Cup ski media, to cheer him on.

When his years with Ski Sunday came to an end, Fitzi Film became Fitzi Art and the passion for ski racing came pouring out in a colourful technique that was uniquely Fitzi. Energy glowed from every piece. Most had a message, conveying the excitement of a great result, paying tribute to an historic race, sharing a theme with one of his many charities he supported. 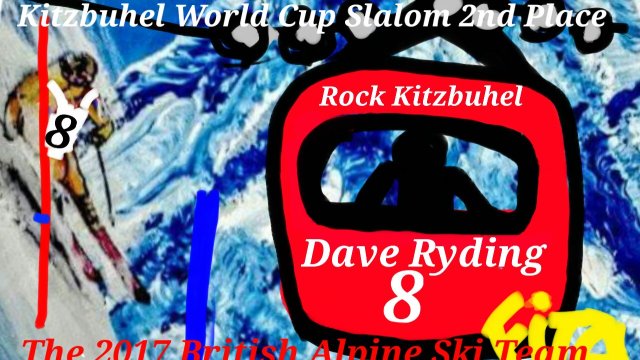 Stuart was always the guy from Hillend ski centre. When the facility fell on rough times in 2010, a project launched through Facebook attracted 26,000 members along with efforts to inform elected officials of the importance of access for youth. Prominent in the campaign, was Fitzi, through his artwork and enthusiasm.  Now known as Midlothian Snowsport Centre, Hillend, the facility still continues to give young Scots a chance to learn the essentials of skiing. 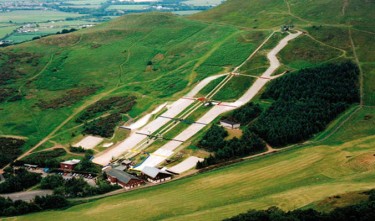 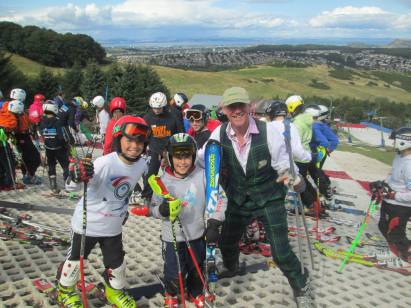 Personal health challenges in recent years meant we no longer saw Fitzi. Through social media, he remained active, reaching out to his many friends throughout the ski fraternity with his Facebook page: “World Cup Downhill Only Ski Racers Ski Sunday Support Team”.

Much of what I’ve shared above comes from the outpouring of memories, sadness and gratitude for a man who had life-long friends from within his ski fraternity of Scottish skiing right to Olympic and World Cup champions, journalists, coaches and sport leaders. Stuart’s energy was infectious. His creativity boundless and frantic. His love for skiing and ski racing a life-long passion. He was one-of-a-kind in the truest sense.

Nick Fellows, a National Team athlete with Team GB but best known now as the voice of Eurosport TV coverage of World Cup skiing, shared the following heartfelt description of a ski racing legend: “The most happy, crazy character of the piste who cared, mentored and gave so many of us the belief anything could be achieved. Fitzi a true rock star of the mountains, thank you for all your guidance and wild days… You will never be forgotten and always revered as a true shining star.”

Music was a big part of our daily life on the Tour. Boom boxes that pounded out in wax rooms while tuning skis, in the vans while driving from race to race or in our rooms as we wrote letters home or decompressed from the day. Around the British Ski Team, UK bands dominated playlists, led by one of Fitzi’s favourites: Rod Stewart. As I reflect back, it’s the lyrics of David Gilmour, Rick Wright and Roger Waters of Pink Floyd that leap out, so aptly describing Fitzi:

Shine on you crazy diamond
Come on you raver, you seer of visions
Come on you painter, you piper, you prisoner, and shine

Rest in peace, Fitzi. Your energy and passion will always brighten our days. 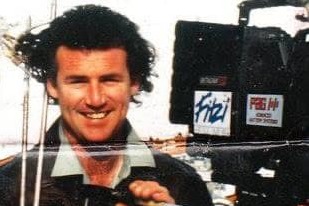 On a personal note, the time I was able to spend with the British Ski Team during the winter of 1972-73 and those intense three months from June to August of 1973, were transformative. These young Brits introduced me to the fantastic world of European ski racing. They taught me the ropes, of how to succeed in a sport dominated by the traditional ski powers, with an attitude of “You ask why? We say why not!” All became close friends through our shared passion for fast ski racing. I can never say “thank you” enough to Konrad and to our missing comrades in crime, Fitzi, Peter and Willy.

13 Responses to Och laddie … you always reminded us to make it fun. A tribute to our friend, Fitzi.