Champions School On The Streif

I knew this day would come. The Streif is an old friend. A venue we always looked forward to. A track that was honest, tough, brutally fair and pure adrenaline to race. We were boys! We loved to face down a challenge. The tougher, the better. We wanted to push our limits, see how far we could go, but as we quickly learned, always within respectful boundaries.

Thanks to the guidance of Mike Wiegele, an influential coach in my early years of ski racing, I discovered the excitement and tradition of ski racing on the classic tracks: the Arlberg-Kandahar, Lauberhorn-rennen and Hahnenkamm. I was introduced to the personality of each downhill – the Mausfalle, Steilhang, Alte Schneise at Kitzbuhel; Hundschopf, Hanegg-schuss and Osterreicher-loch of Wengen. These colourful names then came alive when in 1975 I earned my place on Canada’s World Cup Team.

Each section posed a puzzle to solve: reading the snow and careful inspecting of the track to discover the fastest line to the finish. Building confidence to push to the limit. But never beyond. 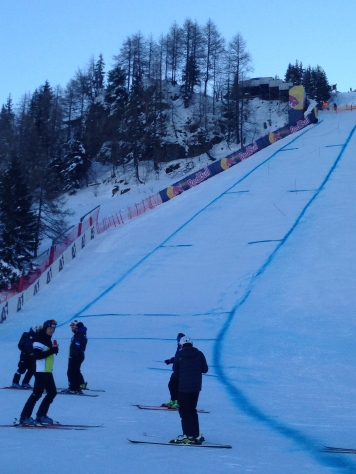 As a Hahnenkamm-Sieger, I know what it takes to win on The Streif. To unlock the secret path. To make the world’s toughest downhill your friend. But as time has marched forward, speeds have mounted. Surfaces have changes to be harder, more durable. Equipment is faster. Training opportunities have diminished – in our day it was quite normal to have five or six training runs before race day. Now, two or even one are the norm. Extensive safety installations line the entire four-kilometre track to protect the athlete. The crowds seem to grow each year, drawn like moths to the flame – to take in the spectacle of man against an impressive mountain – and the siren song of the threat of impending disaster.

I knew the day would come when one of my children would reach a level to be in the start gate on The Streif. For many years I’ve wrestled with this, wondering what would run through my mind as the start-clock began the countdown.

There is always a lot of talk about the reputation of the Streif. Scary. Intimidating. I never felt this. There was always a deep respect, but Hahnenkamm week was the highlight of the season – when “real” downhill racing began. Where it was tough, it was honest and it was fair. I thrived in the starthouse and had to learn to curb enthusiasm in the finish to first carefully reflect on the run … and then feel the rush of energy from a thrilling ride down an awesome track.

So when one of your own is in the start gate, ready to build their own relationship with The Streif, what goes through your mind?

To be honest, as the race progressed, like always, there is a nervous anticipation. But this is more because like any parent, you hope they perform to their expectations. It’s their journey, their experience. Ski racing parents learn to be supportive, positive and ready to do the driving – but the rest is up to the young athlete. What they learn fr

om the daily guidance of their coaches and competition with their peers. How they absorb the environment and learn. It is their ski racing experience.

The EuropaCup experiment on the Streif was brilliant. It gave this younger cohort a taste of the show. A big bite out of a very tough track to learn. Excellent preparation for the Hahnenkamm. It taught them the importance of respecting the track, showing patience with the line and that racing downhill is the most thrilling experience a young man can ever have.

Your Organizing Committee used every aspect of the event to teach, to give young athletes a taste of the World Cup, incorporating the race into the Hahnenkamm week. From the opening ceremonies, pre-race bid draw, an extra training run through the Mausfalle and Steilhang sections, use of the exclusive warm-up area at the start, live TV coverage on ORF (with exceptional TV ratings!), prize money and awards – the approach was to expose, teach and support. All your people were outstanding mentors, committed to a learning environment to prepare these youngsters for the future.

The next generation of athletes, who in a few short years will become the champions of the Streif, were energized for more. They are, after all, boys at heart. And they love a tough adrenaline challenge. This, has never changed.

The Kitzbuhel Ski Club, as custodians of the Hahnenkamm tradition, have been innovative – showing tremendous sensitivity to the ongoing challenge of good athlete development and how best to nurture the next generation of speed skiers. Alongside three other World Cup organizers of speed events: St-Moritz, Lake Louise and Wengen – each with their own unique (and successful) approach in supporting the next generation and providing access to World Cup venues – younger athletes are getting the invaluable experience necessary to transition to the toughest level of competition in our sport.

This investment into the future will pay enormous dividends. So because it is never said enough in alpine ski racing, “thank you” to for thinking of the younger generation, for your investment into Continental Cup level.

Yours in sport,
Ken

5 Responses to Champions School On The Streif