For 36 years the FIS Alpine Junior World Ski Championships has gathered the best ski racers in the world to compete in the six Olympic disciplines. Athletes between the ages of 16 and 21 from over 45 nations (and growing) gather at a ski resort selected a minimum of two years in advance, to compete and to gain experience in their pathway to the higher levels of our sport.

The World Juniors are unique. Convention suggests they are similar to the Continental Cup level – Europa Cup or Nor-Am – but this actually is not accurate, as senior athletes still dominate these levels. The World Juniors are the only competition worldwide that is exclusively for the best juniors.

“This event is a very important stepping stone for our program” said Canadian Men’s Development Team Head Coach, Johnny Kucera. “This is the first level where our athletes must qualify for a world competition. But it’s much more than that. Once here, they get their first taste of a major event: the huge number of teams, the pageantry, learning to manage the major Games environment. It’s an important step.”

The major National Ski Associations (NSA’s) use this event for benchmarking their athlete pathways. Typically, World Junior teams are made up of a blend of athletes. A very small number are already competition on the World Cup. The majority focus their season to the Continental Cup (Europa Cup, Nor-Am, Far East, South America & Australia/New Zealand Cup), the remainder are juniors that come from provincial teams and clubs. Through selecting the best juniors, NSA’s can measure the quality of their programs and the depth of their talent.

The leading nations of alpine ski racing make a significant commitment to their Development Teams. From Austria to Sweden, France to Slovenia, these nations ensure their best juniors are outfitted as a Team, fully supported by coaching, equipment service and team support staff and are prepared through year-round training groups. They profile their athletes as full members of their National Teams and provide media support to publicize their results as they too rely on sponsors and financial contributions to contribute to team budgets. 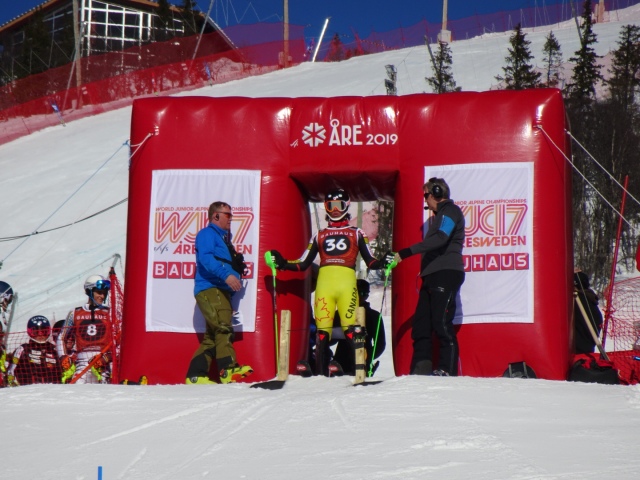 Is there a correlation between a podium result at the World Juniors and subsequent World Cup, World Championship and Olympic podiums? Results support this, but not entirely. Using the Olympic Winter Games of 2014 and past two World Championships (2015, 2017):

Those who guide athlete development and selecting National Teams, use the World

Juniors as one benchmark, amongst many. Juniors are developing athletes who have not yet reached their physical or mental maturity – and may not for another few years. A limited number of athletes will soar quickly into the limelight. Most work diligently forward and will use a full decade to mature into contenders.

There are other factors that influence outcomes at the World Juniors. Equipment can be a major factor, as some nations will ensure their best are equipped with skis from their World Cup teams. Also, not every venue is a useful measure of excellence. At the 2016 World Juniors in Sochi, extreme spring-like conditions made start position a key factor for success. This year, in the men’s downhill at Aare, four athletes in the top 10 had start numbers of 30 or higher – a testament to the quality of the track and snow surface.

Some may question the quality of the experience at the World Juniors, that it is a waste of money and competing against the powerful teams can demoralize younger athletes. But if the goal is to compete at the world level, an athlete must start somewhere – to step up against the best. Every athlete will face tough moments that push their skill set and their self-confidence, where they discover they are no longer the best on their home hill. The sooner an athlete widens their view and seeks out tough competition to push, motivate or learn from – the better.

Athletes thrive on competition. They want to know where they stand. They need to know their strengths and weaknesses, what gaps may exist in technique, conditioning or mental attitude and to understand what they need to do to push their envelope. An aspiring athlete needs to be exposed to the work necessary to be a high performance athlete.

World Junior athletes get their day in the spotlight and then return to their respective Continental Cup series, National Championships and spring FIS races, bringing with them new experience. This, in turn, motivates those who aim to make the team in coming seasons, who aim to make their own mark even though they may have missed the big event. It is important to communicate throughout the athlete pathway that the World Juniors are a worthy goal to aim for.

This annual event offers an incredible opportunity to network with the leaders of youth programs from around the world. It’s a chance to observe the commitment made to youth development, to discuss their goals and hear of their challenges.

Best of all is the privilege of meeting future champions before they step up to an international podium.

The 37th edition of the FIS Alpine Junior World Ski Championships will be held in Europe’s highest city, home to the World Economic Forum and the historic Parsenn-Derby: Davos, Switzerland – January 28th to February 8th, 2018