It was an action-packed day of racing on the Jakobshorn above Davos as the men took centre stage for the Super G.

The skies cleared as predicted, but left more than 30cm. of snow, prompting an enormous effort by the race crew and volunteers to prepare the track. The start was delayed from 10:00 to 12:00 due to the heaver than anticipated snowfall. This delay forced the cancellation of the ladies Super G, which will now be held on Sunday.

It certainly turned out, in the words of FIS Technical Delegate Bernt Lauth, to be “an interesting race”.

The track was race-ready, winds light and the early morning sun had just tucked behind clouds to darken the track, but the light was good.

Marco Odermatt (SUI), skiing out of position #11, added another gold to his growing collection of Junior World Championship titles, smoothly outpacing the field by .88. The US had a banner performance with two on the podium led by River Radamus (Vail) taking silver, Luke Winters (Mt. Hood) taking bronze and Kyle Negomir (Vail) in 7th.

Cameron Alexander (Whistler Mt./BC Ski Team) put in a solid performance charging from position #21 to lead the Canadians in 5th place, Simon Fournier (Tremblant) the only other Canadian to make the finish ended up 31st. 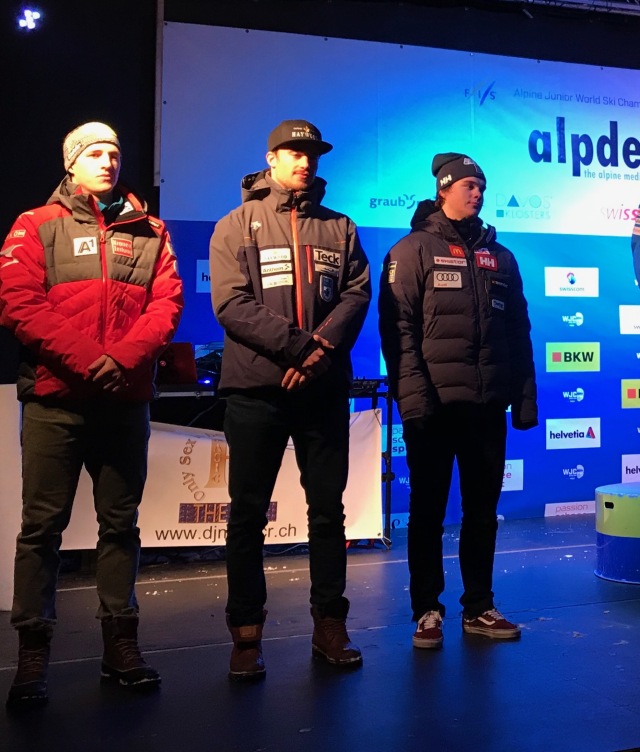 The speeds were high and combined with rolling terrain and jumps built into the Championship, it was critical to negotiate air smoothly, maintain good snow contact and anticipate the dips and rolls to keep on line. Fourteen of the first twenty athletes failed to finish, snared by the tricky set and terrain. Unfortunately, this included Sam Mulligan (Grouse Mt.), Jeff Read (Banff Alpine) and Riley Seger (Whistler).

Such is the challenge of Super G. No training runs, only free-ski on the hill, an inspection of the set and the art of the event is to negotiate the race using experience, feel and reaction. A tough lesson learned for those who did not finish.

Next on the program is the Alpine Team Event, which takes place under the lights in the heart of Davos-Platz. Sixteen nations will go head-to-head in parallel racing action with teams made up of two ladies and two men. You can follow the action on live streaming at: swiss-ski.ch/davos2018

Canada remains in 4th place in the Mark Hodler Cup standings, as the Swiss extended their lead over Austria and USA moved up to 3rd.