#Davos2018 – Looking Into The Future Of Our Sport

The athletes have moved on. A select few turn their focus to PyeongChang and competing in the Olympic Winter Games. Most return to their respective Continental Cup series in the Far East, Europa Cup or Nor-Am Tour. There are NCAA Carnivals and Invitationals, along with catch-up time in class.

For all, there will be the memories of a Junior World Championship experience – the thrill of competition, of testing limits amongst the best 16 to 21 year olds in the world.

While the FIS Alpine Junior World Championships are classed by the International Ski Federation as a ‘level 1’ competition on par with Continental Cup, they are unique. The only high-level competition – reserved for juniors. This is distinct from Continental Cup races where the best are trying to break through to the World Cup. The European Cup is dominated by seniors (21 or older). Nor-Am, Far East and the Southern Hemesphere Cups of South America and Australia/New Zealand have healthy contingents of elite seniors and juniors, but largely from each respective geographic region.

This makes the World Juniors a very special.

The Championship is an important step of the athlete development pathway. Athletes are still learning, gaining experience and preparing for “The Show”. Competition venues are targeted to be at a high level and organization is expected to be on par with a World Championship, but the technical challenge is tailored for juniors – not yet at the World Cup standard.

Second, the World Juniors are an important benchmark opportunity for National Ski Associations, to measure the progress of their athletes and how they measure up against the competition. There is a fairly high – but not absolute – correlation of success between the World Juniors and subsequent World Championship or Olympic podium results.

The core message: only a precious few burst onto the World Cup quickly from the World Junior ranks. The vast majority of athletes may take as long as ten more years to mature into stars. So to coaches, parents and National Ski Associations – be wise, be patient, be supportive and play the long game with your talent. You may be surprised how commitment and hard work may be the key ingredients for ultimate success.

As five-time Gold medalist Marco Odermatt told the FIS Newsflash, “I am extremely happy with my results here at Junior Worlds. It is still a big step to World Cup level, so there is lots of work ahead of me”. 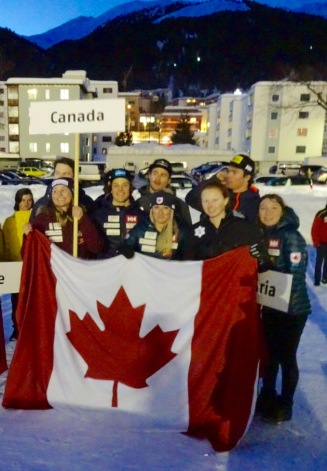 There were high expectations for Team Canada’s juniors going into this season, particularly in the men’s speed events and to defend their World Championship title in the Alpine Team Event. The Team suffered an enormous setback in October, losing Ali Nullmeyer to a double ACL injury. Nullmeyer had won Silver in slalom and was a core member of the Gold medal crew that dominated the Alpine Team Event (ATE) in 2017.

The timing of the 2018 World Juniors posed a real challenge for National Teams who wanted to give Olympic experience to younger athletes, particularly those with speed or alpine combined skill. Travel, proper acclimatization to Korea and the start of official training (which began February 7th) overlapped the races in Davos. But if an athlete is ready for Olympic experience, the chance only comes every four years. So 2016 medalist Jack Crawford made the tough choice and accepted nomination to the 2018 Olympic Team, a good choice in for his long-term development.

This was a Team that is known for charging and the Championship started on a positive note in the men’s downhill, with Sam Mulligan (Grouse Mt. Tyee) taking silver – only .02 hundredths from Gold – and Jeffrey Read (Banff Alpine) .29 behind in 6th. Cameron Alexander (Whistler Mt./BC Ski Team) posted an excellent result with his 5th place in the men’s Super G, but the remainder of this competitive crew were amongst a large number that missed gates or had mishaps in a very tricky set. Similar mishaps beset the Canadian Team in the Alpine Combined. They ran up against a Swiss Team that had tremendous experience with the track.

Two youngsters, born in 1999, joined the Team for the technical events: Declan McCormack (Osler Bluff/Ontario Ski Team) and Liam Wallace (Sunshine/Alberta Ski Team). For both, this was their first opportunity to race in Europe, a constructive, positive eye-opener, as these two will be the anchors of Canada’s future World Junior Teams.

Our ladies Team was small with the absence of Nullmeyer and election of Amelia Smart (Team Panorama/Denver) and Cassidy Gray (Team Panorama) to defer participation this year. The attending trio of Stefanie Fleckenstein (Whistler Mt.), Marina Vilanova (Tremblant) and Stephanie Currie (Osler Bluff/Dartmouth) gained good experience with multiple top-20 results. Nullmeyer, Smart and Gray are all juniors next year and eligible for the 2019 Team.

So results were certainly not what the Team expected. But over the past four years the 1996 to 1998 cohort has a solid record: 23 top ten results, including eight medals. They are competitive in all events, so can move on from junior competition knowing they are in the mix as they mature and prepare for the highest level – aiming for Olympic, World Championship and World Cup competition. They also have a wealth of experience gained in the 2017 World Juniors at Åre, Sweden, which will hosts FIS Alpine World Ski Championships next winter.

The World Juniors are a crystal ball into the future of our sport. This is the future of ski racing, with exciting competitions, large contingents of parents and friends on-hand to cheer on the Teams. We’ve seen glimpses of future greatness, tremendous skill, emotion, passion, tears and cheers. There is much to be positive about – in Canada and around the world – with this snapshot of our best juniors. Fifteen nations placed athletes in the top-10. Eleven nations won medals. We need to be smart and bold with managing speed events in the future, especially for ladies, but the tech events are robust. The skill level is high throughout the field. The future is indeed, bright.

The World Juniors offer a chance to network with the leaders of youth programs from around the world. It is an incredible opportunity to observe the commitment made to youth development, to discuss their goals and hear of their challenges. Perhaps best of all is the privilege of meeting future champions before they step up to an international podium.

Thank you, Davos, for this contribution to our sport, to our athletes.

Now, we look forward to the 38th edition of the FIS Alpine Junior World Ski Championships in Val di Fassa, located in the beautiful Dolomites of the province of Trentino, from February 18th to 27th, 2019.