It’s July. Glacier training season is underway. From Stelvio to Les-2-alpes to Hintertux and many more glaciers and snowfields across Europe and North America, athletes of every age and ability are back to the snow.

The new “dynamo” of Alpine Canada: Marie-Hélène Thibeault, ACA’s newly minted Director of Philanthropy and Alumni Relations, asked if I might share some personal experiences from recent days on the snow with the Team. You’re going to get to know ‘M&H’. She’s very persuasive and loves to share her passion for ski racing, the new energy and spirit blooming inside our National Team programs. So how could I say no?

This was a double-duty trip for me: combining a series of meetings with International Ski Federation (FIS) officials and helping out with logistics to help Erik as he needed to get to the Fischer factory in Upper Austria and their boot specialist, who resides near Schladming.

Maintaining close contact with an important supporter is critical for success in World Cup. The relationship between athlete and the ski supplier is foundational – and best maintained through direct, personal contact. So it is very important to make the time to visit, meet and directly share information and feedback about how the product felt in the season past, where improvements might be made, learn about new ideas and developments and keep informed – so the pilot (the athlete) is current and making a constructive contribution to the brand team. The better an athlete is in sharing experience and feelings about flex, touch, feel and glide, the more productive the partnership. 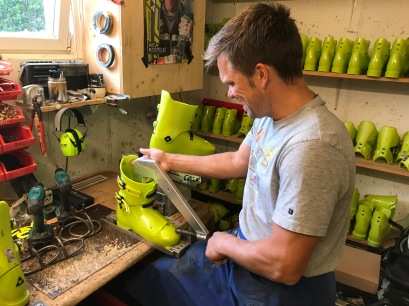 And it’s not only skis. Boot fitting is critical. Speaking directly with the experts who build hundreds of boots each year for the world’s best, is invaluable. Taking the time to have boots personalized is essential. Harmonizing the skis, plates, bindings and boots … takes an investment of time. Setup is the key to success at the highest level, so working directly with the best in the industry sets the stage for performance. 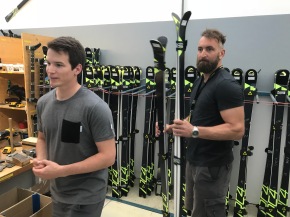 So after two intense days with the Fischer Team, it was an nine-hour journey to Zermatt, including the transfer to the train and subsequent ride on the electric taxi to the hotel in automobile-free Zermatt.

The Matterhorn Glacier high above the iconic mountain village of Zermatt has been a regular summer stop for the past several years. Topping out at 3,883 metres, it’s the highest in Europe, with reliable snow and usually stable weather. And after a winter that the locals described as “extraordinary”, snow coverage is better than usual.

For the next ten days, the Canadian World Cup Tech Team will be training beneath the iconic Matterhorn. The athletes will focus on GS and SL training in this block, building on their first on-snow session held three weeks ago in Whistler and preparing for an August racing block in the Southern Hemisphere winter of New Zealand. This planned progression also include an autumn block back on the glaciers for final tune-up before the opening World Cup race in Soelden – now “only” 3 ½ months away.

When you walk out of the tunnel on the Klein Matterhorn, it seems little has changed from my last visit as an athlete in 1982. The spectacular gondola and tram ride to the ‘roof of Switzerland’ is the same. The t-bars spread across the glacier are the same. The training slopes are eerily similar. I can describe where the downhill training run snaked from 3,900m (yes, higher than the top terminal of the tram) to the toe of the glacier four kilometers away.

But that is where the similarities end.

This week the slopes are be buzzing with energy. Teams and athletes from Croatia, Switzerland, Germany, USA, Italy and many more  fill nearly all the available hill space with training lanes. Ski training in alpine, freestyle and snowboard is a roaring business.

To share some perspective: Les 2-Alpes in France has more than 80 training lanes for Teams. So it’s great business for the ski stations who crave guests who want to stay for more than the typical one or two days of your typical summer visitor.

National Teams of the entire FIS family are on the snow. In Zermatt, alpine training lanes cover the steeper upper slopes of both east and west sides of the glacier. An extensive snowboard and free-ski park sprawls across the lower slopes. Athletes converge every day from Zermatt and Cervinia. The hill chatters with a multitude of languages from athletes across the full spectrum of our sport.

The day starts early. Off the valley floor at 6:00am to be on-snow at 7:00. If the weather cooperates, the snow is rock-hard corduroy, a near-perfect match to the mid-winter race courses. 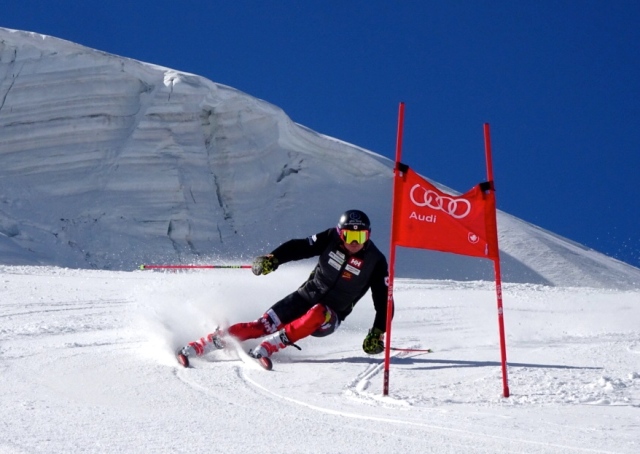 They load early to get a head start setting up the training lane. Watching the clock is essential as the window for optimal training is narrow. As soon as the direct rays of the sun hit the snow it begins to soften. Training will wrap up usually by 11:00.

Working the training courses also includes continuous evaluation of equipment. So Jan and Matteo are on the hill to observe and listen, before heading down before the athletes to start working on gear for the next day. 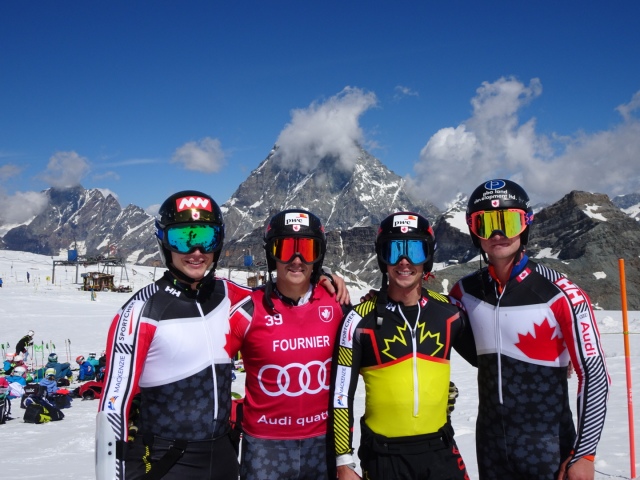 Afternoons are for planned and informal training. On-snow camps offer a chance to move beyond the usual fitness program to use the local environment to mix up the training regimen. A location like Zermatt has incredible mountain biking and hikes in every direction from the town. 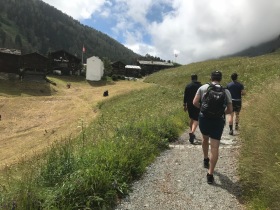 At altitude, weather is always a risk. We arrived to 5-6 cm. of powder snow on day one, a novelty for July 4th, but the new snow insulated the groomed track which did not freeze deeply. So training was useful but somewhat limited. Optimal conditions are clear evening skies were the temperatures will plunge on the glacier, resulting in rock-hard snow for the early morning.

And those early mornings are breathtaking. Stepping out onto the Matterhorn Glacier with the soaring peak of the Matterhorn (4,505 m.) jutting sharply into the sky to your right. In the distance, the Mont Blanc massif (4,808 m.) rises out of the haze. The Breithorn (4,164 m.) looms over your left shoulder and even at 7:00am there are climbers trudging to the peak up a well-worn trail. The vast snowfield surrounds you.

This is a moment to breathe …. on the roof of Switzerland, drinking in the grandeur of the Alps, to appreciate the door of adventure that alpine ski racing can open. 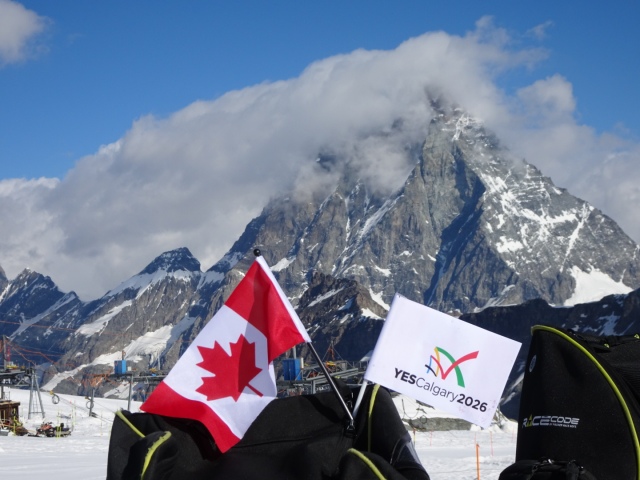