It sure is a great place to train ….

The horn with the iconic tilt remains hidden until you arrive in Täsch, the jumping off point to take the train to Zermatt. On arrival, the mountain dominates everywhere, everything. It’s the basis of commerce, dating back to the early days of alpinism which attracted the British elites who challenged the ‘un-climbable” Matterhorn.

The Matterhorn Valley is experiencing a tourism boom. Over 2.2 million visitors rode the Glacier Express to view the majesty of the Swiss alps and it’s star. Nearly ninety percent ride the rails to town, walk the Bahnhofstrasse, ride the Gornergrat Railway to take in the panorama of the fourteen 4,000 metre peaks featuring the Matterhorn, Breithorn, Liskamm, Monte Rosa and the numerous glaciers which spill into the valleys.

A meaningful, but much smaller crew are able to go about our business of training, as we reside at the south end of the village where only the more ambitious tourist visit. We go about our business, rising at 5:30, on the series of gondola and trams (2) which ferry us to 3,883 metres. We walk down a 200 metre tunnel bored through the Klein Matterhorn to emerge on the Theodul Glacier which surrounds much of the base of the Matterhorn.

From 7:00 to 12:00 the Plateau Rosa is alive with athletes. In mid-summer and autumn, Zermatt has become the primary speed training venue for World Cup Teams, thanks to the highest altitude and superior snow conditions. The first two weeks of July are quiet, with only the Croatian, Canadian and select Swiss athletes on-site, accompanied by an enormous crowd of young, aspiring ski racers from Switzerland, France, Italy, USA and Canada. 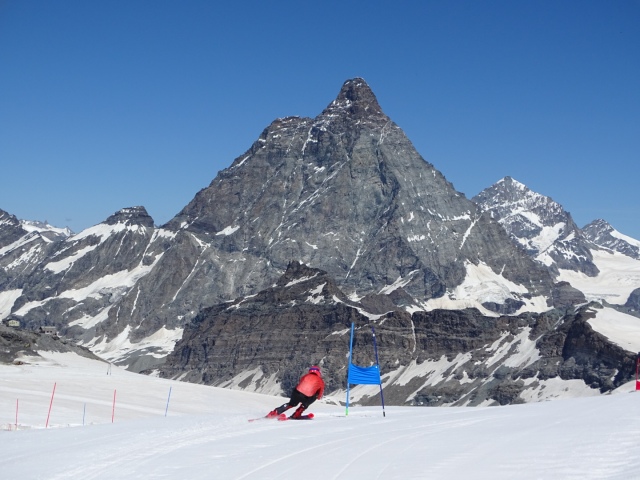 Most of the younger athletes come up from Cervinia on the Italian side, where for 65 Euros you get accommodations and full pension (all meals). But while the Swiss side is more expensive, we get an extra hour head start on the snow. Wonder why? The entire glacier lies within Switzerland, so they protect their competitive advantage. Prices are quite reasonable if one stays away from the classic tourist haunts in Zermatt. And, as mentioned above, it is actually very quiet.

Bikes have taken over the town – the eBike rules, as this is by far the easiest way to get around in a car-less village – which is 5 km. long. Hiking is spectacular in every direction. Mountain hotels, bistros and refuges are found up every trail and valley.

But Zermatt remains at the core a centre of alpinism and alpine skiing. Winter is the high season and the past two have been spectacular.

Returning to the Mattertal, to see the silent sentinel looming over the village is always a welcome sight for the first ski training session of the season. It becomes automatic to check the mountain, watch it’s moods and changing colours. Trying to divine what tomorrow might bring for weather.