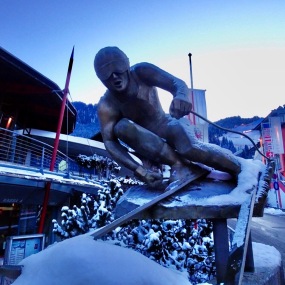 The 80th running of the International Hahnenkamm-rennen is in the books. The names of Jansrud, Mayer and Yule are now part of the legendary event. The Streif and Ganslern are now quiet. Waiting ….

In our world of ski racing, the Streif has become synonymous with the ultimate challenge. The extreme test of downhill, on a classic track steeped in tradition that snakes along the north face of the Hahnenkamm. Since 1931, this is downhill racing at its’ best.

My bond with the Streif began through a gift. And it was quite a gift.

I was fourteen. Pretty downcast, with a cast on my left leg thanks to a broken ankle suffered in a training crash. It was mid-season and I was out for the winter. My coach, Mike Wiegele, wisely kept me busy, putting me to work in his ski shop at the base of the Lake Louise ski resort, fitting rentals. It kept me occupied, rather than moping about forced time off the snow.

Mike knew he needed to keep me busy, to keep me positively engaged. His solution was to give me a book written by American outdoor author, Curtis Casewit, “Ski Racing: Advice From The Experts”.

I devoured every page.

Casewit had crafted a chronicle of ski racing through the words of the icons of the day: Jean-Claude Killy, Toni Sailer, Nancy Greene, Egon Zimmerman, Marielle Gotschl and Buddy Werner. Insight was shared about technique, equipment, fitness, the origins of ski racing and our rich history.

But what resonated were the descriptions of the “classics”. The rotation of the Arlberg-Kandahar, founded by the father of ski racing, Sir Arnold Lunn, rotated between Garmisch, Chamonix and St. Anton. The longest of the classics: Lauberhorn-rennen of Wengen. And the edgy Hahnenkamm of Kitzbühel. The insight of ski racing’s best made these races come alive.

The Streif stood out above them all.

Through these vivid descriptions, the Streif came alive. The Mausefalle (“mouse-trap”), Steilhang (“steep wall”), Alte-Schneise (“Old Cut”), Seidlalm (named after the nearby mountain hut, home to Hansi Hinterseer and location where the concept of the World Cup was first discussed), Hausberg-kante (Hausberg-jump), Traverse and Zeilschuss. The great racers artfully described how to negotiate these seemingly impossible passages. It was enthralling to read how each tackled the track. Their tricks, their skill, their passion for speed.

Casewit also included a record – the history of each classic. A record of our sport. The women and men who captured the imagination of nations as they conquered the heights of ski racing. Included were iconic Canadians, our “Golden Girls”: Lucile Wheeler (double-gold, 1958 World Championships), Anne Heggveit (gold, 1960 Olympics) and Nancy Greene (silver-gold, 1968 Olympics).

But something was missing. There were no Canadian men in the record.

Five years later, the words of the book became a reality. I stood in the start gate atop the Hahnenkamm. The education of a band of young Canadians had begun, as we studied the nuances of the track. Where to take risks and where to ski within the band of confidence. Through five seasons, we chipped away, earning top ten results. But for a team that had been branded “the Crazy Canucks”, the Streif remained an unsolved puzzle. 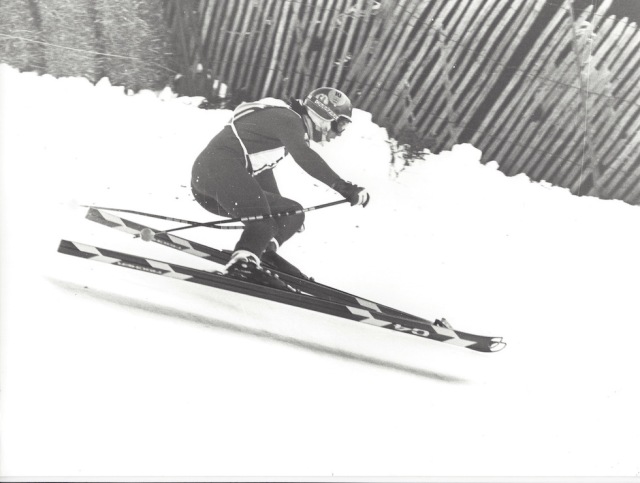 We always looked forward to Hahnenkamm week. Falling mid-season, we knew the furs would be out, the Formula One drivers in town and the crowds would be boisterous and enormous. The Streif is an honest track. It did not take special skis or a specialized skill. Only a complete downhiller could win. An athlete with the combination of bravado, skill and experience.

We needed to find the solution to the puzzle. So, on a bad-weather day on the nearby Hintertux glacier in October, 1979, Steve and I decided to try a different approach. We cut out to Kitzbuhel and hiked the track from Zeil to Start, drinking in the subtle changes in the slope, the bigger picture of the mountain.

Three months later, we were back. The 1980 edition was the “jubiläumsrennen” as the Kitzbühel Ski Club celebrated the 40th edition of the race. From the first moment down the track, I felt the difference. The Streif came alive in a different, new way. There was the track. But there was also everything else.

The Streif was our riddle to solve. Brushing away all stray thoughts in the Start-hutte, to focus. Facing down the start-schuss with a clear mind. Two firm pushes out of the start, quickly into the tuck and then swinging into the Mausefalle to position for a clean flight. Land – run straight through the compression and steer to the left to position for the Karussell, driving through the round-house turn and setting up to drop into the Steilhang, driving towards the ‘straw-wall’ – to see it and go … the leap of confidence to successfully skip across the convex exit turn and squeeze every drop of speed before the flats of the Bruckenshuss and Gschoss. Then maintain a high level of focus, with the track now a pussy-cat, before plummeting into the Alte-Schneise, to keep loose and let the skis float. Focus is the key through the Lärchenhang, to hold a clean edge to again squeeze speed into the flat before the Oberhausberg swing turns which set up the jump, pause, direction change, pause and drive to through the final turn before fee-falling across the traverse and steering into the Zeilschuss. With the finish in sight, the final compression sets a final trap for the unwary, and a final push. 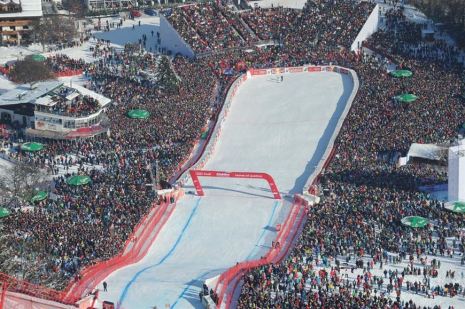 The riddle to solve was to understand the meaning of respect. The athletes, for the track. The organizers for the spectators and the show. The spectators for those challenging the Streif. The ski family for the tradition of the Hahnenkamm.

Contrary to all the hype, standing in the start is not scary. You are not afraid. Those who are afraid of a tough downhill have left the sport years before they come to the World Cup. Yes, there is the nervousness of competition, of pushing to the max on a tough track. It’s is, after all, the toughest downhill in the world. But it is the most fun anywhere. In the finish, you train yourself to reflect immediately on the run, then you just want to go back up and do it again.

There is a deep history, now through 80 editions. Every year, it is ‘one hell of a ride’. Yes, there has been tragedy, but this is ski racing where athletes push the limit to challenge themselves. This never overshadows the triumph of spirit, of energy to push to the limit of skill and courage – never beyond.

For me, it has been a fifty-year journey. From picturing the Streif from the words of my heroes, to finding myself in the start staring down the track. To solving the riddle of the track – – and to the full appreciation of this incredible tradition in alpine ski racing: our great champions, our historic tracks, the volunteers and organizers who pour their energy into the preparation of the slopes to the spectators on-site and watching on TV and the pure joy our sport brings to millions young and old around the world.

This is the Streif.

1 Response to The Streif ….