The limitless love of parents 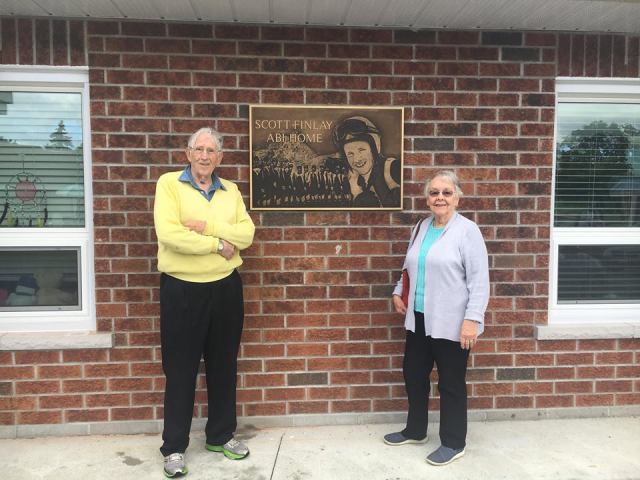 A fast track, changing conditions and in a moment, a life changed forever. On February 24, 1978, while competing in the Canadian Alpine Ski Championships, Scott Finlay crashed.

A fall in downhill racing is rare, particularly for experienced athletes. Sadly, the combination of  jumps and the rock-hard snow resulted in an impact that caused brain trauma. Scott survived, but has been under the care of his parents, Hugh and Rosemary, for most of the past fourty years.

Imagine the angst of Rosemary and Hugh, as time marched on. What would happen to Scott? Where would he live? Who would be his caretaker?

In tragedy, there is always hope. And the love of parents is limitless. The Finlay’s remain committed to Scott as much today as ever. Their tireless effort to find a permanent home for Scott became a reality in Finlay House, a facility for those with acquired brain injuries, located just outside Napanee, Ontario where Scott learned to ski.

Hugh always directs credit to others in this long journey. First and foremost, he recognizes the late Randy Starkman, Canada’s foremost journalist in the Olympic and amateur sport world. Randy learned of Scott’s story and the efforts of Rosemary and Hugh to find him a home. It was no surprise to any of us who knew Randy, that he took up this cause and brought profile through his thoughtful writing, particularly with his piece “When love runs out of time” published in the Toronto Star in 2011. (https://www.thestar.com/sports/2011/03/11/when_love_runs_out_of_time_parents_fear_for_injured_son.html)

And Hugh always mentions Ed Champagne, former Manager of the Canadian Alpine Ski Team and current Manager of the Team Alumni program. Ed, too, always shared updates about Scott with the widely dispersed alumni of the Ski Team. Kept everyone informed, particularly when the momentum for a facility took shape.

There also are Scott’s teammates and ski racing friends who worked tirelessly behind the scene to lobby government, secure donations and keep the momentum alive. Heroes, every one.

Regardless of what Hugh may say about others helping, it was their drive, their love for their son, that made Finlay House a reality for Scott and five others who now live with him.

Speak with Hugh and he always mentions how keen Scott is about watching ski racing. He’ll tell you how excited he becomes and that he is the number one fan of the current athletes. He speaks so positively about all who helped make the facility and Scott’s future a reality. His appreciation of the support of the ski racing community and friends. He is so gracious, so positive and his love – and Rosemary’s – is without limit for their son and all of the Finlay family.

Read the Toronto Star story by Kerry Gillespie, who carries on the Toronto Star tradition of original sport content about Canada’s Olympic and amateur sport athletes, which was posted September 14, 2017.
https://www.thestar.com/sports/amateur/2017/09/14/canadian-skier-injured-in-1978-is-right-at-home-in-finlay-home.html